From USA Today by Ben Mutzabaugh

Southwest Airlines enters a new era Tuesday, flying its own planes to destinations outside the United States for the first time ever. The low-cost carrier’s international era officially begins with Southwest Flight 1804, which is schedule to depart Baltimore/Washington International Airport (BWI) for Aruba at 8:30 a.m. ET. Ten minutes later, another international Southwest flight is scheduled to depart BWI – this one bound for Montego Bay, Jamaica. Those will be the first of six routes Southwest will fly on Tuesday to destinations outside of the United States. The others are Atlanta-Aruba; Atlanta-Montego Bay; Baltimore-Nassau, Bahamas; and Orlando-Montego Bay. Southwest’s seventh international route – Saturday-only service between Orlando and Montego Bay – launches Saturday (July 5).

All of the international destinations that Southwest begins flying to today are already served by subsidiary AirTran, which Southwest acquired in 2011 – in part to gain access to those international destinations. But Flight 1804 will mark the first time that a Southwest-operated 737 flying under the Southwest brand will take paying passengers to a destination outside the United States on a regularly scheduled flight. Southwest CEO Gary Kelly says the company’s nascent international service represent a huge growth opportunity for the airline. When international passengers are counted, Southwest remains dwarfed in size by “legacy” rivals American, Delta and United. But when only domestic passengers are counted, Southwest has grown to become the largest carrier of passengers within the United States. “This opens up all of North America to us,” Kelly says about the carrier’s expansion outside the mainland U.S. — his comments coming a recent sit-down interview at Southwest’s headquarters in Dallas. 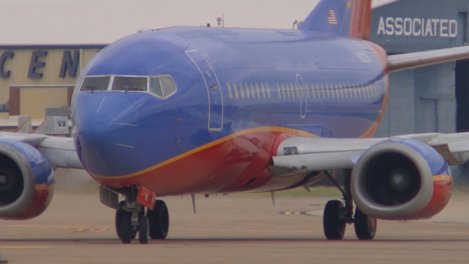 While international flights are today’s focus, Kelly says that Alaska and Hawaii also under consideration by the low-cost carrier. The carrier’s next wave of expansion will look at all destinations beyond the 48 contiguous states of the mainland U.S. that are within the range of the Boeing 737 – the only aircraft type flown by Southwest. “We’ve pinpointed 50 potential destinations that could be several hundred aircraft worth of growth,” Kelly says to Today in the Sky. “It opens up Hawaii, Alaska, Canada, the Caribbean, Mexico, Central America and even the northern tier of South America.” Still, as Southwest ventures outside the mainland U.S., it will increasingly go head-to-head against the larger legacy carriers that already serve those areas and have lots of experience with international flying. Still, Southwest has been a fierce competitor against those rivals, with much of its rapid growth during the past four decades coming in markets where it has battled those big carriers. Kelly thinks Southwest’s route network – which historically has skewed more toward point-to-point flying than the hub-and-spoke model used by its legacy rivals – will give it a unique position as it fills out its international route map. “We’ll have an array of U.S. cities to choose from,” Kelly says about cities that could land international routes on Southwest airplanes.

“That’s a really neat thing about Southwest,” he continues. “We have a lot of flights in a lot of places. So unlike our legacy competition — where they have three or four focal points in the United States — we’ve got 30. So we’ll have international flights from an array of markets and more than what we’re serving from today.” He says Southwest’s initial efforts will come in converting service to AirTran’s international to Southwest service. Two such airports — Milwaukee and Orange County, Calif. — will be the next Southwest cities get Southwest-operated international service. That comes in August, when Southwest expands its international route map to include the  Mexican destinations of Cancun and Los Cabos. Another three Southwest cities – Austin, Chicago Midway and San Antonio – will get flights to Mexico or the Caribbean during Southwest’s next international expansion on Nov. 2. And Southwest is adding international capabilities to its bases at Houston Hobby and Fort Lauderdale, saying foreign flights from those airports will be added to the schedule within the next year or two. “Beyond that, we’ll keep those as closely guarded secrets as where we want to focus,” Kelly says.

And while Southwest sees more than four-dozen possible new destinations outside the 48 contiguous states, Kelly cautions they won’t all come at once. “It could take us another 25 years to add 50 cities,” he says, noting that Southwest added only three dozen cities between the time he joined the airline in 1986 and took over as CEO in 2004.