Open in Colleyville, Whole Foods gears up for Fort Worth

From Fort Worth Business Press -By Scott Nishimura, snishimura@bizpress.net 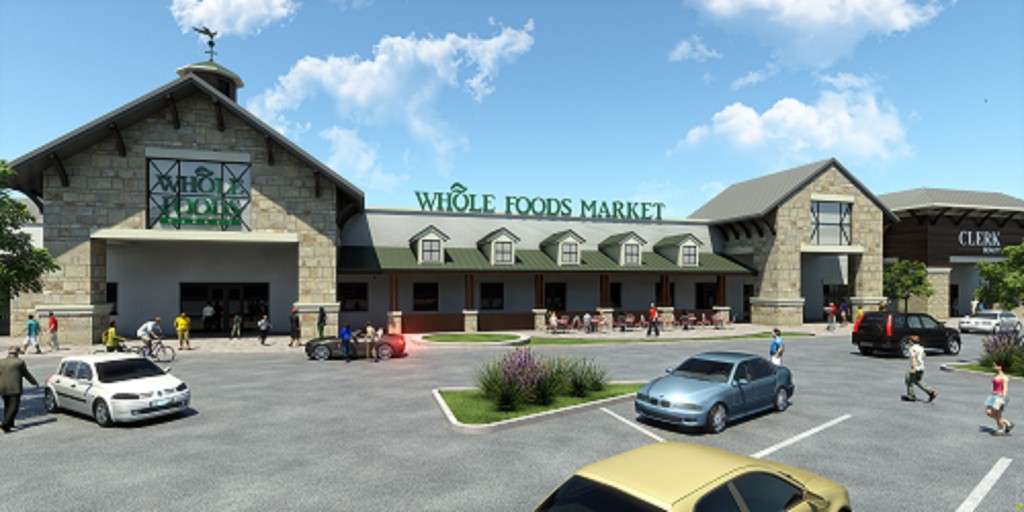 Whole Foods Market, which opened its newest store July 8 in Colleyville, won’t be done in the Metroplex even when it completes the next four stores it has on tap for the area, according to Mark Dixon, the company’s Southwest region president. The highly sought-after Austin grocer announced earlier this year it would open a store at the planned Waterside development on the Trinity River in southwest Fort Worth in 2016. The company also is planning a fall opening for a store at Highland Village in Denton County, summer 2015 opening in Uptown Dallas, and fall 2015 opening in Frisco.

“Assuming Fort Worth does well, I think there’s another store opportunity there,” Dixon said in an interview Tuesday after the company celebrated the grand opening of the Colleyville Boulevard store. “I think there are some markets in the mid-cities that aren’t being served, and I think there’s some north-south opportunities in Dallas. In general, the Texas economy is better than most other states. We’re just seeing great success.” In opening the Colleyville store, Whole Foods touted the addition of the company’s second wood-fired pizza oven, a large adjoining bar and restaurant an expanded array of prepared foods and items from 60 local vendors.

Dixon – who joined Whole Foods as a grocery team member in 1984 and now oversees two dozen stores, a distribution center, two bakehouses and a culinary center – sat down for a Q&A with The Business Press:

What drove the addition of the bigger bar with the wood-fired pizza operation?

We don’t make any two stores the same – we bring a core store, and we also say “why don’t we try some new things?” It’s very important for us to innovate. One of the things that’s been a super success has been the bars. People can shop, but they can also enjoy a beer. I see a lot of moms like to enjoy the bars, because they don’t feel like they’re going to a “bar” bar. They can just come in, they do their shopping, they enjoy a glass of chardonnay. For this store, we wanted to make it a little larger, connect it to pizza. We’ve had pizza ovens in our stores since the early 1990s, but for years it’s become standard. We’d bring in a gas oven and put out traditional recipes. We just really felt can we take pizza to another level. We decided to go with a wood-fired oven. There’s a whole flavor profile that you wouldn’t get with a gas oven. It’s a really hot oven, it really becomes a craft. This is our second wood-fired pizza. We just opened a store in Houston two weeks ago where we did wood-fired.

What else is new with this store?

Our self-service food bars. If you went back five years ago, you might find one bar in a store. This store has three, which includes a dedicated barbecue bar. You can’t really see it, but in the back of the house, we have a pretty substantial-sized room with a very heavy duty commercial smoker that’s running 24 hours a day.

So you do all your smoking in-house?

Yes. And in some of the future stores that we’ve designed, we’re going to try and find a way to expose that smoker so it’s more visible.

Is it a wood-fired smoker?

It’s a combination gas-assist. The gas provides the heat, but you put wood in, and the wood smokes the product.

You have about 60 vendors who are based in the D/FW area. Are some of these getting their first shot at the mass channel?

We’re a combination of both things. We procure a lot of global products. At the same time, we also like to procure a lot of local products. It’s one of the ways we can do our best to support the community. We have a dedicated forager team. That’s their sole job: go hit the pavement and find local products. We have two for Texas, one for Oklahoma and Arkansas – we just rolled Dallas into her territory – and we have one for Louisiana. In some cases, (products are) easy to find. But from time to time, we’ll stumble across new startup vendors. They may be ready to start a new product, but lacking ready capital. Or, in some cases, just the know-how: I can make product, but how do I get it to market? We also have a local producer loan program; when banks are unwilling to loan these vendors money, we’ll do it for them. It’s a low-interest loan. It allows them to bring the product to market. I know (the Southwest Region has) given out over 30 loans in the last two years.

Are your foragers food people?

They’re food people, but they have to have a lot of business savvy. In some cases, these small local vendors might not even own a computer, especially small farmers. Or they want to bring a product to market and they don’t have a UPC code on it. So, the forager’s job is just to help them through all that. A great example: One of our first loans we gave out was to an egg company out of Austin. It was to a guy named Jeremiah and he sold Jeremiah’s Eggs. It was for a true pasture egg; people were literally walking around all day long gathering eggs out of the nests. Great guy, great product, but no real understanding of how he gets his product to market; he was selling to farmer’s markets. We found him and recognized his capacity was large, so we gave him a loan that allowed him to buy more assets and have greater production.

How big are these loans?

Switching gears a bit, what do you describe as the primary geographic draw for this store?

The primary draw is going to be where we’re at. It’s going to be Colleyville. I think we’re going to definitely draw from Southlake, Grapevine, maybe as far south as Arlington. Generally speaking, you put a point in the center and drive 16 minutes in any direction – that’s generally what our draw is going to be.

It just depends on where the store is located. It’s not necessarily an intentional strategy. Some of our stores draw from a narrower market, some of our stores tend to be a more regional store. If you take our Highland Park store (in Dallas) – a very dense urban area – we tend to draw from a short distance. But at the same time, if you take a store like Plano or Fairview (near McKinney), not only is it drawing from its neighborhood, in many cases it’s the closest Whole Foods Market in 50 or 80 or 100 miles. It tends to have more of a regional draw.

Looking at the Metroplex, what holes in the geographic spectrum are Whole Foods interested in?

I look at the whole history of Whole Foods Market. We started in 1980. We had just a simple mission back then. The good news is, we’ve kind of arrived. The popularity of organics is widespread now. It’s no longer a guessing game. At the end of the day, what you put in your body does matter. With the awareness being greater, there are just a lot more markets we can be in. I think of the whole Dallas-Fort Worth area. I think there are plenty more opportunities.

What excites you about the Whole Foods’ Waterside site in Fort Worth?

The thing that excites me about that opportunity is that what the developer is doing there is so much bigger than one grocery store. He’s taking a very large space there, he’s referring to it as a ‘conscious place’ – a place where you could work, you could play, you could live. I think it’s got a lot of potential.

At one point several years ago, it was announced that Whole Foods was going to the Clearfork development. Why the switch?

Like any lease we sign, there are sort of time frames put in it, and conditions. We just got to a point where some of the conditions weren’t met, and we thought it was best that we find another location. And the good news was, we did, and it’s not too far away. We think the access will be very good. It’s something we think we can get open quicker – I’m confident we can – than we might have been able to get the other site open.

Is Whole Foods giving any thought to coming into the dense urban neighborhoods with the small format stores it has?

I think there’s room with a smaller box, but the (merchandise) opportunities are much greater than they were five years ago. And on top of that, we’re putting in more robust kitchens, greater prepared foods bars. There’s a lot more that we’re stuffing in these boxes. Although I never know what opportunity might present itself, my favorite size is 35-45,000 square feet. We can bring in everything and I think it just gives our customers a better choice. I’m always open-minded, and it just kind of depends on what we think the demand will be.

What new features can you discuss now that we should expect to see in the Fort Worth store?

We don’t have everything solidified. I definitely know we’re going to go bigger with prepared foods. I think you can expect to see everything you see at Colleyville, and we’ll definitely have one or two surprises.