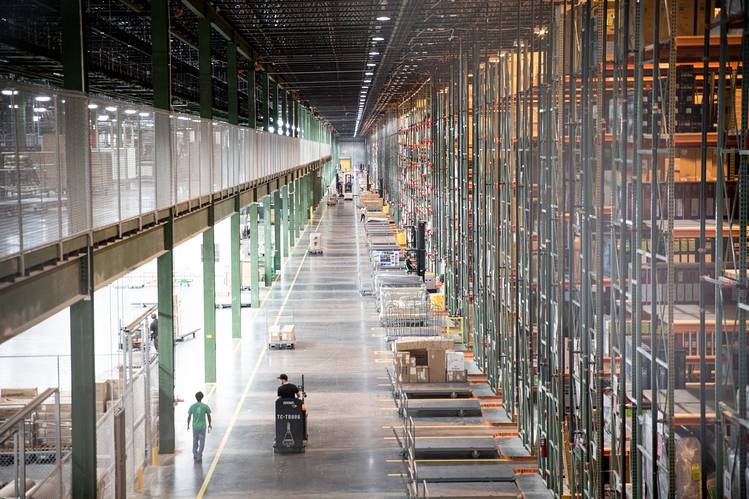 From the Wall Street Journal by Ana Campoy

THE COLONY, Texas—The plunge in oil prices over the past year has taken some of the energy out of the Texas economy, but the Lone Star State has been able to muddle through thanks to the still-booming Dallas-Fort Worth metro region. Even in Texas, the recently opened Nebraska Furniture Mart in this suburb 30 miles north of Dallas stands out for its outsize ambitions. A retail pièce de résistance roughly the size of three Wal-Mart WMT -0.19 % supercenters, it carries a vast array of recliners, refrigerators, rugs and just about everything else. Ron Blumkin, president of the Omaha-based chain, majority-owned by Warren Buffett’s Berkshire Hathaway Inc., BRK.A -0.25 % is confident the DFW region’s growth can support the mammoth store.

“I look out there and I see hundreds of new rooftops,” he said. “That is pretty exciting to me.”

The continued economic success of the DFW metro area, the nation’s fourth largest, with nearly seven million people, is one of the reasons Texas has so far managed to stave off a sharp downturn despite losing thousands of jobs in the oil patch and related industries. The region lost more than 100,000 jobs during the recession, but it has added nearly four times that number since then. Once the nation’s top job creator, Texas has tumbled to a middling 36th place in that category, the latest data from the U.S. Bureau of Labor Statistics show. In Houston, the country’s energy capital and one of the state’s main economic engines, some 35,300 people abandoned the workforce from December to April, the largest five-month decline since 2000, according to the Federal Reserve Bank of Dallas. The bank expects Texas employment to grow by less than 1% in 2015, after galloping at a pace of 3.6% last year.

But the story is markedly different in the DFW region, which, with its thriving business-services and tech sectors, highlights how much Texas has diversified since the 1980s oil-price collapse threw the state into a long-lasting slump. The area has added a net of more than 36,000 jobs since October, when oil prices started to nosedive. Dallas isn’t the only Texas region that has diversified. The San Antonio metro area, which has 2.3 million residents, now has a burgeoning biotech sector. Austin, with its population of 1.9 million, had the lowest unemployment rate among the nation’s largest metro areas in April as it undergoes a hotel boom. But because of its economic heft and size, Dallas will play a bigger role in determining the rate of Texas’ growth.

“If we’re going to create net jobs, it will be because of North Texas,” said Pia Orrenius, an economist at the Dallas Fed. The region’s central location, relatively low housing costs and its major international airport, not to mention many local tax incentives, have drawn many corporate relocations. The region received more domestic migrants that most other metro areas in the country in 2014, according to data from the U.S. Census Bureau. In Plano, another Dallas suburb, bulldozers are readying a 240-acre plot to build a complex that houses Toyota Motor Corp.’s new U.S. headquarters, which is being moved from Southern California. FedEx Corp. and Liberty Mutual Insurance are building towers in the same office park, dubbed Legacy West. Those three companies alone are expected to employ about 13,000 workers with an estimated payroll of about $1.7 billion a year, said Fehmi Karahan, one of Legacy West’s developers.

To cater to them, he is speeding up his own project, an adjacent high-end shopping center with condos and a luxury hotel, by more than a year. The center, he calculates, will generate at least 2,000 jobs. Meanwhile, retail giant Amazon is adding more than 1,500 jobs at its fulfillment centers in DFW. To be sure, DFW hasn’t been immune to the shrinking oil sector. In the first four months of the year, employment growth slowed to 2.2% from 4% last year, according to the Dallas Fed. Since the beginning of the year, the area has lost more than 5,000 jobs in the construction, energy and other related sectors.

There are other challenges. The overall growth is starting to threaten affordability, driving housing inventories to record lows and prices to highs. Dallas posted a 10% yearly increase in single-family home prices in April, the largest of any big metro area in the country, according to CoreLogic, a real-estate data company. Pratik Shah was outbid 12 times before finally landing a home last month in the suburb of Wylie for $205,000. “Making offers of $10,000 to $15,000 above listing price, you’d think you’d have a good shot,” Mr. Shah said.