‘You’re Not Going To Recognize Victory Park In Fall Of 2017,’ Developer Says 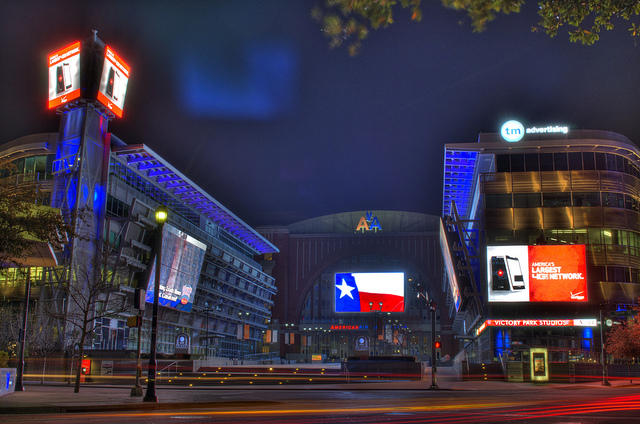 The neighborhood around the American Airlines Center in Dallas was born a decade ago with promises of bustling commerce and restaurants day and night, game days or off days. Despite thousands of apartments and condos, Victory Park’s never lived up to that promise. So developers are trying a reboot. One-way streets are built for speed. And while that’s great for folks driving to the American Airlines Center, pedestrians avoid Houston Street and Victory Avenue at all costs. Urban planner Patrick Kennedy says some people would rather pony up for parking than dodge traffic.

“One anecdote that I’ve heard from a number of people who work in the Crescent area, which is like three blocks away — they drive to games because they don’t feel safe walking the three blocks,” he said. Those one-way streets will soon become two-way. Kennedy says that’s a step in the right direction because it will make the neighborhood safer to get around and encourage business. By the fall of 2017, Victory Park will have a crop of new restaurants, including a 24-hour BuzzBrews. A movie theater is on the way. So is a Pilates studio. A 23-story office tower is in the works and over 1,000 new apartments will go up in the next couple years.

Kennedy says that doesn’t guarantee success. “Ultimately, that’s the supply of a lot of stuff and that doesn’t necessarily answer the second half of the equation … Is there the demand side to populate those businesses and for them to do well,” he said. Terry Montesi says just wait and see. He’s the founder and CEO of Trademark Property, the retail development company for Victory Park.

“You’re not going to recognize Victory Park in the fall of ’17,” he said. Montesi says he agrees the neighborhood didn’t live up to what was billed the first time around. “Signage wasn’t finished, the public amenities weren’t finished, the art program wasn’t finished, the lighting wasn’t finished, the light wasn’t installed at Victory Park Lane and Olive, on and on and on,” Montesi said. “So it really was never finished.” Montesi says the story will end differently this time around, especially since one of the reboot’s priorities is making Victory Park easier to navigate without a car. That’s a pretty significant turn for a city obsessed with the auto. One of Dallas’ first protected bike lanes is being built from the Katy Trail along Houston Street. A concrete curb will separate the bike lanes from lanes for automobiles, officials say. “It completely prevents people from parking in the bike lane, which is a problem that we have,” said Ashley Haire, the bicycle engineer for the city of Dallas.

The reboot makes way for cyclists, helps connect the American Airlines Center to the surrounding neighborhood, and pours money into new business. It’s that last part that still has Kennedy a little skeptical. He doesn’t believe in: “If you build it, they will come.” “No that’s never true and that’s one of the worst phrases in real estate,” Kennedy says. Still, developers insist that making Victory Park a vibrant commercial district isn’t just a dream: It’s a promise.