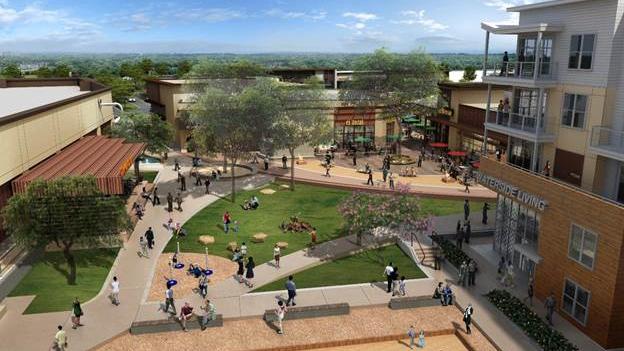 After Fort Worth-based Trademark Property Co. landed Whole Foods at its $100 million Waterside mixed-use development, CEO Terry Montesi knew he was on a roll. “We landed the first Whole Foods in town and we are in a very special site and in a special development,” Montesi told me. “We want to make sure this is a great place to hang out and meet your friends to sit under a big shade tree. This will be unlike anything you’ve seen before.” That special vibe has brought some big retailers to the 63-acre mixed-use development at Bryant Irvin Road and Arborlawn Drive, along the Trinity River. The project is under construction Montesi’s firm has landed tenants for about 20,000 square feet of retail and restaurant space, with plans to sign another 50,000 square feet of retail space in the near future.

“We have another six or eight leases in negotiations, which would be around another 50,000 square feet,” he told me. “Things are moving along.” Montesi said the firm is negotiating with a variety of retailers and restaurants ranging from local, regional and national concepts. Other plans for the Waterside development include residential development, about two or three hotels, 200,000 square feet of retail space, and about 800 apartments along the Trinity River.

The 20,000 square feet of new leases include the following tenants:

Taco Diner will open its second Fort Worth location within a 3,900-square-foot restaurant within the project.

Zoe’s Kitchen will open its second Fort Worth location in 2,800 square feet of space.

LeBron James-backed Blaze Pizza will make its Fort Worth debut with a 2,800-square-foot restaurant.

Mattress retailer Sleep Train will bring a new prototype store to a 3,602-square-foot space within Waterside.

Waterside is the first ground-up project that will be developed as part of Trademark Property’s “conscious place” initiative, which will have a focus on bringing the community into the development. Those elements include a public space called The Grove, a trailhead for the Trinity Trails, signature bridge, chilled water station, urban garden and a riverfront amphitheater. Construction on Waterside began last year, with the initial phase slated for completion in late spring 2016. The initial phase of Waterside also includes 375 luxury apartments built by Transwestern Development Co.